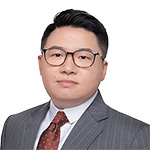 Rongxin has extensive experience in the field of financial and commercial dispute resolution. As well as practising in Mainland China he previously worked as a Registered Foreign Lawyer in the dispute resolution department of a leading law firm's Hong Kong office.